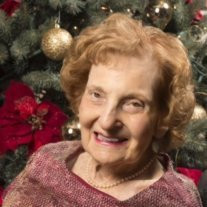 Hammann, Audrey K. (nee Kupperstein, aka Kooper), of St. Louis, Missouri, died November 1, 2013 at McKnight Place Extended Care surrounded by family. She was 92. Dear wife of 46 years of the late William Curl Hammann, sister of the late Carol Feigin, mother of Mark Gregory (Maria Elena Díaz) of Ashburn, VA., Joyce (Jeffrey Carney) of New York City, NY, and Scott Jeffrey (Anna Knueven) of Creve Coeur, MO, grandmother of Mariana, Mark Christian, Leah Camille, Elena Joy, Teresa Marie, William Gregory, and Jackson John. She was born March 22, 1921 in West Hartford, Conn. to Herman William Kupperstein and Mattie Maislen. At the age of six she began her study of piano and at age eight began composing, following in her mother’s steps. At the age of 10 she took first place in a concert sponsored by the Pianoforte Club where she played the first movement of Mozart’s C minor Concerto. Audrey and her mother were students of the concert pianist and teacher Raymond Augustus Lawson (1875-1959) of Howard University. Audrey debuted as a pianist at the age of 11 in a concert at the Horace Bushnell Memorial Hall in Hartford, Connecticut. While in high school Audrey studied composition with Ross Lee Finney (1906-1997) at Smith College and Bruce Simonds (1896-1989) at Yale's summer program in Norfolk, Connecticut. She was a scholarship student in composition with Werner Josten (1885-1963) at Smith College, Northampton, Massachusetts where she graduated with A.B. Magna cum laude in 1943 and was also a member of Phi Beta Kappa. She received the Settie Lehman Fatman Award for original composition at Smith and received a full fellowship to the Juilliard Graduate School in New York City where she studied composition with Frederick Jacobi (1891-1952) and Bernard Wagenaar (1894-1971) and piano with Olga Samaroff-Stokowski (1882–1948). Samaroff encouraged Audrey to perform in the Layman's Music Course held at Town Hall. Audrey also performed with Arthur Fiedler and the Boston Pops Orchestra per his request where she played Beethoven concerti, Tchaikovsky and many others. She also was a soloist with the Dayton, Cincinnati, Hartford, Milwaukee, and Smith Orchestras. After her graduation from Juilliard, she was part of the renowned Four Piano Ensemble (managed by Sol Hurok) under the leadership of Stephen Kovach. For two years the unique foursome of two women and two men played memorized performances with their pianos, making long successful tours throughout the United States and Canada with their four Steinway B Grands and concert benches. It was during this time that she changed her stage name to Kooper on the advice of her manager. As a Fulbright scholar in Paris, Audrey toured France as a Goodwill Ambassador for the U.S. Embassy, receiving reviews which praised her for her profound musicality. While in France she attended conferences presented by Nadia Boulanger whose influence she said: influenced me with her musical intensity and her compelling dynamism. After returning to the United States she taught at Smith College, Webster University and the University of Missouri at St. Louis. While on the ship to Paris, she met her future husband, William (Bill) Curl Hammann, a chemist and Fulbright scholar on his way to study at the Sorbonne. They married October 17, 1955 in Tappan Hill, Tarrytown, NY and resided in Dayton, Ohio OH where Bill began his career with Monsanto Corp. In 1961they were transferred to St. Louis, MO where she continued her career as a concert pianist and taught piano and composition. She also studied composition herself with Robert Wykes (1926-) at Washington University and Bach under the supervision of Rosalyn Tureck (1913-2003) during Tureck's one semester stay at this university. Compositions include the class song for her 1939 high school graduation from West Hartford (now William H. Hall) High School where it became the school song for the next 50 years and an orchestral tone poem Pan performed in 2004 by the Webster University Symphony conducted by Allen Carl Larson. In 2005 the St. Louis Chamber Chorus premiered her unaccompanied choral setting Ships by Walt Whitman and in 2006 recorded The Ship Starting on Singing St. Louis - recorded on CD with The St. Louis Chamber Choir conducted by Philip Barnes. The following year, the St. Louis Chamber Chorus they commissioned her to compose Winter Celebration for the December performance. A world renowned concert pianist, Audrey’s musical gifts brought joy and peace to many. Her friends, students and peers will miss her playing and passion that was a gift to all. Her three children played in the St. Louis Youth Symphony Orchestra under Leonard Slatkin and for the St. Louis Municipal Opera. A memorial service to celebrate Audrey’s life will be held Friday, November 29 at 10 a.m. at #2 McKnight Place, St. Louis, MO. 63124. In lieu of flowers, the family requests contributions are made in her memory to the St. Louis Symphony Orchestra, 718 N. Grand Blvd, St. Louis, Mo. 63103 or to the Ladies’ Friday Musical Club c/o Judy Goldman, 11223 Tureen Drive, St. Louis, MO 63141. Family and friends can review and share stories, photos and condolences online at www.stlcremate.com

The family of Audrey K. Hamman created this Life Tributes page to make it easy to share your memories.

Send flowers to the Hamman family.