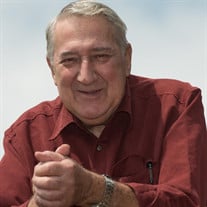 Thompson, Charles Edward, of Hillsboro, Missouri, was born April 25, 1942 in St. Louis, Missouri, to Charles and Dorothy (nee Anthony) Thompson, and entered into rest, Tuesday, September 26, 2017, in St. Louis, Missouri, at the age of 75 years, 5 months and 1 day. He is preceded in death by his parents. He is survived by, Five (5) children, Angie Thompson-Mather, Charles “Charlie” Thompson Jr, JoAnn Thompson, Patrick Thompson, and Morgan Thompson, Nine (9) grandchildren, Elizabeth Todd, Nathaniel Pezzo, Tony Pezzo III, Jimmy Thompson, Victoria Thompson, Cassidy Moreland, Hannah Moreland, Natalie Thompson, and Madison Thompson, Five (5) siblings, JoAnn Erselius, Joyce Thompson, Charlotte Duba, Mary (Jerry) Sanders, and Raymond (Mary) Thompson, and many friends. Charles is remembered for being a man who loved helping people. Charles built many successful businesses throughout his lifetime. Charles enlisted in the Marines in the Vietnam War, and was very patriotic. He would give his last for those he cared about and was a dad to many who believed in family for everyone. He will be missed by many that loved and knew him. A memorial may be held at a later date. Family and friends can review and share stories, photos and condolences online at www.stlfuneral.com and follow details of this event and others in the community at www.facebook.com/stlchapelhill.

The family of Charles Edward Thompson created this Life Tributes page to make it easy to share your memories.

Send flowers to the Thompson family.