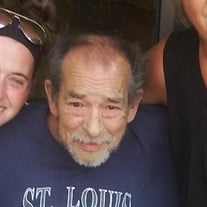 Jimmy Wayne Bennett Of Cedar Hill, Missouri, was born on March 5, 1946 in Saint Louis City, Missouri to Eathel A. Bennett and Amy L. Smith and passed away September 30, 2021 in Cedar Hill, Missouri at the age of 75 years old. He is preceded in death by his parents, his sisters Nettie, Willa, Evelyn, brother Bill, late wife Sheryll Jane Bennett, granddaughter Amymarie, the second love of his life Kathleen Ann Lawson and daughter Marie. He is survived by his children Shawnmarie Melton, Ellis Newman, Lester Newman and Lyle Newman. Including his added children Becky, Gene, Bobby, Mike, Suzy and Kevin. Loving grandfather to Lonnie, Ronnie, Stephen, Jeffery, Damian, Jason, Erik, Sara, Nicolas, Nicole, Lyle, Lona and Mason. Including his added grandchildren William, Kevin, Jessica, Snapper, Kayla, Donald, Gene, Kaci, Hannah, Andrew, Krystal, Robby and CJ. Devoted great grandfather to Sean, Jenna, Skyler, Jordyn, Lonnie III, Wyatt, Brody, Ava, Damian, Bella, Erik, Bradley, Anthony, Atchison, Zoey, Clowey and Kynlee. Proud Papa Of Jaylynn and Jeffrey Jr. Along with numerous extended family and friends. Jimmy started working at a very young age to help take care of his family. He was a painter for many years but had a lot of different jobs in between. You could say he was a Jack Of All Trades. He did whatever he had to do to make sure his family was taken care of. He enjoyed the simple things in life. Whether it was having family BBQ's at his sister Evelyn's house, standing around the yard playing bottle caps, washers or horseshoes, going fishing, sitting around the kitchen table playing games (rummy, pass the trash, dominoes), Watching his western movies (can't forget about them) or simply sitting around with his nephew's Rob and Dino reminiscing about the good old days. Whatever he was doing he never took life for granted and cherished every minute of it. He will always live on in our hearts and will be deeply missed by all who knew and loved him. A memorial service will be announced at a later date.

Jimmy Wayne Bennett Of Cedar Hill, Missouri, was born on March 5, 1946 in Saint Louis City, Missouri to Eathel A. Bennett and Amy L. Smith and passed away September 30, 2021 in Cedar Hill, Missouri at the age of 75 years old. He is preceded... View Obituary & Service Information

The family of Jimmy Wayne Bennett created this Life Tributes page to make it easy to share your memories.

Send flowers to the Bennett family.