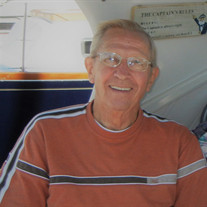 John R. Layton, December 6, 1937 passed Sunday, December 17, 2017 after recently celebrating his 80th Birthday. He struggled and coped through a frustrating and demeaning battle with Alzheimer’s. Preceded in death by son Tim, brothers Ed and Al, nephew Dan and Godson, Michael Layton, and beloved Godmother, Marie Reising. John was married to his loving wife of 58 years, Dolores (Epstein) Layton. He is also survived by and will be dearly missed by his son Ron (Judy) Layton of Pompano Beach, FL, daughter Terry (Jim) Demos of Fenton, MO, son Jeff (Rachael) Layton of Farmington, MO, grandchildren Stephanie (Eric) Christensen of Jacksonville, FL, Emily & Allison (Gwen) Layton, Nick and Shelby Demos, great grandson Ellis Christensen and sister Marilyn Meier. He was an uncle and friend to many and was a positive influence and touched many people's lives. John was the youngest of four children, attended Our Lady of Sorrows grade school and graduated from Cleveland High. He owned John’s Barbershop on Kingshighway until long hair for men became the rage. John loved escaping to the outdoors, especially hiking in St. Francois State Park where he spent many hours enjoying the study of wildlife including his favorites; snakes, insects, birds and plants. John ‘s fascination for the Bald Eagle and the Native American Indian Culture contributed to his unique collection of artwork which included figurines, pictures, dream catchers, and more. He and his wife Dolores built a collection to include over 400 unique pieces which were on display in a dedicated room dubbed the “John Layton Museum” by his son Ron. Another enjoyment was his extensive exterior Christmas decoration and light display which was a tribute to his late son Tim. John had a sweet tooth, loved and always had an endless supply of cookies, M&Ms, hard candies and strawberry ice cream (which Paul prepared perfectly). John always had a smile, a wave, a sense of humor and was quick witted with one liners. Much gratitude to the ENTIRE TEAM at Delmar Gardens Meramec Valley, that gave unselfishly of themselves to John’s care from 2014-2017. Thanks to the Pathways Hospice Team, who helped him and the family through the last few months. Special thanks to Dava, Chris, and Kaitlyn who would make John’s face light up and produce a huge smile and wave, and will miss John as much as his own daughter. Per John’s wishes, he will be cremated and burial will be private. Please utilize this website to share how John touched your life and feel free to upload photos. In lieu of flowers, contributions In John’s memory would be greatly appreciated, online at www.Alzheimers.org, or by mail; Alzheimer’s Association, 9370 Olive Blvd, St. Louis, MO 63132, or online at www.mochf.org or by mail Missouri Heritage Foundation, PO Box 366, Jefferson City, MO 65102, (donation to support hiking, wildlife viewing)

The family of John R. Layton created this Life Tributes page to make it easy to share your memories.

Send flowers to the Layton family.