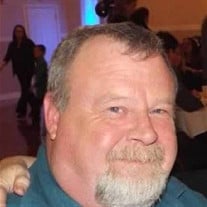 John “Jerry” Muehlenbeck Muehlenbeck, John “Jerry”, of Kirkwood, Missouri, was born December 8, 1960, in St. Louis, Missouri, and entered into rest, Thursday, December 6, 2018, at the age of 57 years. He is preceded in death by his parents, Fred and Patricia. He is survived by, his spouse, Colleen, children, Kelly (Rick), Laura (Tim), and adopted daughter LeeAnne grandchildren, Becky and Lucas, siblings, Susan (John), Sandy, Freddy “Bill”, Sharon (Brian) and Michael (Sandi), nieces and nephews, Nick, Patrick, Alanna, Frederich, Gabrielle, Susie, Stephen, Neil, Kurt and Anne Marie, aunts, Deede and Connie, a second mom, Gloria Bechel, lifelong friends, Tim Ott, Mike Hittler, Derick Portwine and Gloria McCoy, and he was a dear brother-in-law, cousin, and friend to many. Jerry loved going to the lake, fishing, barbecuing, and was known for being a great cook. He thoroughly enjoyed spending time watching his grandchildren. He was an avid dog lover, and many would call him, “Jack of all trades”, as he could fix anything. He will be fondly remembered and dearly missed by all who knew and loved him. A Memorial Gathering will be held on Sunday, December 9th, 2018, at 2:00 p.m. until 6:00 p.m., at Trinity Church, 1110 South Glenwood Lane, St. Louis, Missouri, 63122. In lieu of flowers memorial donations can be made to Lafayette Industries, 179 Gaywood Drive, Ballwin, MO 63021 or Stray Rescue, 2320 Pine St., St. Louis, MO 63103. Family and friends can review and share stories, photos and condolences online at www.stlcremate.com and follow details of this event and others in the community.

The family of John "Jerry" Muehlenbeck created this Life Tributes page to make it easy to share your memories.

Send flowers to the Muehlenbeck family.