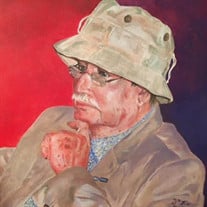 Judge John Lyon Anderson, formerly of Crystal City, MO, left us peacefully on January 27, 2018 in St. Louis, MO. He is survived by his wife of 60 years, Carolyn Anderson, daughters Michele Anderson (Kerry Durr) and Elizabeth Anderson, beloved grandchildren Vivian Mulhern (John), Jake Durr, Lian Anderson, SuSu Anderson, sister-in-law Mary Lou Anderson, and nephews and nieces. He is preceded in death by his parents Gladys and Judge Lyon Anderson, brother Bill Anderson, and sister Katy Anderson. Born August 28, 1928, John grew up in Webster Groves, MO. He served as a U.S. Army Officer in Korea. After graduating from the University of Missouri Columbia Law School, he was in private practice until appointed to be a Magistrate Judge. In 1974, John was elected as a Circuit Judge for the 23rd Judicial District and served in that role until he retired. Highly respected, John held the position of Presiding Judge for much of his judicial career. John participated in many civic activities such as President and Treasurer of the Jefferson County Bar Association, a Founding and Board member of Community Treatment, Inc. (COMTREA), and a Board Member of the St. Louis Area Council of the Boy Scouts. John had a fulfilling legal career, but what meant the most to him was his family. He was a kind, easy going man with a lifelong love of the St. Louis Cardinals, a sense of adventure, a love of learning, and a passion for history. John loved nothing better than spending time with his grandchildren and sharing in many entertaining ways his keen interest in history, philosophy, religion, and law. He will be missed tremendously by those who love him. Rest in peace Gpa. A private memorial will be held in the spring. In lieu of flowers, his family encourages that donations be made in his name to the Missouri History Museum or COMTREA.

The family of Judge John Lyon Anderson created this Life Tributes page to make it easy to share your memories.

Send flowers to the Anderson family.