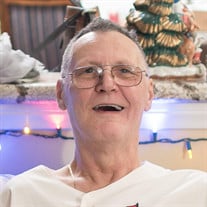 Kenneth “Kenny” Honse Honse, Kenneth of Cedar Hill, Missouri, was born July 3, 1955 in San Diego, California, to John W. and Marilyn Kay (nee Brown) Honse, and entered into rest, Thursday, February 2, 2017 at St. Anthony’s Hospital, in Saint Louis Missouri, at the age of 61 years, 6 months and 30 days. He is preceded in death by his parents. Kenny was the oldest of 8 children and is survived by his seven (7) siblings, Steven (Sylvia) Honse of Imperial, California, Terri Fellows of Cedar Hill, Missouri, Cheryl (Daniel) Schroeder of House Springs, Missouri, Michelle Myers of Las Vegas, Nevada, Donald (Lori) Honse of Minneapolis, Minnesota, Ronald Honse of Minneapolis, Minnesota, Brian Honse of Minneapolis, Minnesota, and and a host of nieces, nephews, aunts, uncles, cousins, in-laws and dear friends. Kenny was a sports fan. He enjoyed watching baseball and Nascar. He was an avid St. Louis Cardinals fan; baseball season was his favorite time of the year. Kenny was an animal lover. He befriended and took in stray cats from time to time. He loved his dog, Miss Daisy. He also enjoyed spending time with his family, dear friends and neighbors in Cedar Hill. Kenny was generous & had a loving soul. He will be dearly missed. A memorial service will be held at a later date. Memorial donations can be made in honor of Kenny to ASPCA (American Society for the Prevention of Cruelty to Animals). Family and friends can review and share stories, photos and condolences online at www.stlcremate.com.

The family of Kenneth "Kenny" Honse created this Life Tributes page to make it easy to share your memories.

Send flowers to the Honse family.