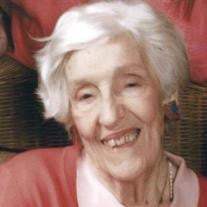 Beeson, Marilyn K. (nee Miller), longtime resident of Glendale, Missouri, was born July 9, 1924, in Decatur, Illinois, to Joseph Bailey and Mary Ruth (nee Elder) Miller, and entered into rest, Friday, March 23, 2012, peacefully at her home, in Glendale, Missouri, at the age of 87 years, 8 months and 14 days. She is preceded in death by her parents, her husband of 65 years, Warren A. Beeson, (Married May 15, 1943), and two (2) siblings, June Miller House and Richard C. Miller. She is survived by three (3) daughters, Ellen (Jack) Chapman, of Webster Groves, Missouri, Jeanne Beeson, of Springfield, Missouri and Mary Jo (Marc) Ekhause, of Springfield, Missouri, three (3) grandchildren, Eric Chapman, Andrew Chapman and Ehren Ekhause, and many other relatives and friends. She was a member of Webster Hills Methodist Church, where she taught Sunday school. She worked with Meals on Wheels and along with her husband was a longtime member of Westborough Country Club. Marilyn was an avid golfer, enjoyed bowling and a competitive gave of bridge. She is fondly remembered and will be dearly missed by all who knew her. Memorial Visitation Saturday, March 31, 2012, from 1 p.m. until time of Service at 1:30 p.m. at Oak Hill Funeral Home, 10301 Big Bend, Kirkwood, MO 63122. Inurnment Oak Hill Mausoleum. In lieu of flowers, contributions may be made to the Alzheimer’s Association, 9374 Olive Blvd., St. Louis, MO 63132.

The family of Marilyn K. Beeson created this Life Tributes page to make it easy to share your memories.

Send flowers to the Beeson family.