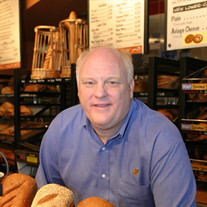 Mark Alan Borland Mark was born on January 6, 1953 in Seattle, Washington to Ted Borland and Joan Miner. Mark is survived by his loving wife of 34 years Linda, his daughter Melanie, her husband John and his two grandsons, John and Daniel. He is also survived by his mom Lin, brothers and sisters: Matt, Susan, Chris, Mace, Melody, Caren and Beth. Mark had a long successful career in the Baking/Food/Restaurant industry. He started that career at just 15 years old loading bakery goods onto delivery trucks at Van de Kamps bakery in Seattle. After high school he went into the Air Force for a short stint and upon his honorable discharge aggressively pursued his career. He worked his way into Management at Van de Kamps in Los Angeles and worked at several different companies eventually earning a degree from the American Institute of Baking. He furthered his education and received a Bachelor of Science Degree in Business Management from Pepperdine University. In 1986 Mark joined Au Bon Pain/Panera Bread where he held various management titles including Executive Vice President, Vice President of Retail Operations, Chief Operating Officer, President of Manufacturing Services and Chief Supply Chain Officer. During his 30 years with Panera Bread, he received many industry accolades including Baking and Snack magazines 2004 Operator of the Year. Despite all of his personal success and recognition, Mark would want to be remembered for the impact he played in his family, friends and co-workers lives. In Mark’s mind everyone he touched was a part of his extended family. He lived his life the way he wanted, believing in working hard and playing hard without compromise. He inspired everyone around to live their life the same way with confidence and passion. Mark’s philosophy and lust for life was so profound that people starting using the term Mark-ism’s to define his penchant for how to live. These were sayings espoused by Mark to impart wisdom to others. An example of a Mark-ism that he used with his team was, “Don’t bring a knife to a gun fight” which in Mark’s mind meant be prepared to counter each and every attack with a well thought out plan, eliminating the competitions leverage. Mark believed in being prepared and winning. He was always optimistic and backed it up with competence, integrity, and commitment. His team loved him because he believed in being both their shield and being their hammer when he needed to. If you were Mark’s friend he was always an advocate, always in your corner. He was a force of nature to help those in need. Mark loved doing pretty much anything he felt like doing. He went sky diving, drove race cars, shot automatic weapons, and had many, many other adventures. Mark travelled and did what ever he thought would be fun and exciting. He also enjoyed watching movies and had a very extensive film library. The movies gave him some of the ammunition he used for sending out inspiring quotes to his family, friends and co-workers. It was his enjoyment to continually find ways to inspire those he loved and bring a smile to their face. We will all miss Mark, but we all know that the spirit of Mark will live on in the lives of those that he touched.

Mark Alan Borland Mark was born on January 6, 1953 in Seattle, Washington to Ted Borland and Joan Miner. Mark is survived by his loving wife of 34 years Linda, his daughter Melanie, her husband John and his two grandsons, John and Daniel.... View Obituary & Service Information

The family of Mark Alan Borland created this Life Tributes page to make it easy to share your memories.

Send flowers to the Borland family.