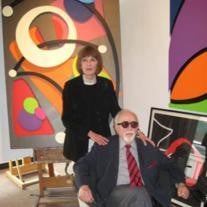 International artist and architectural designer, Ralph Morris Broughton, passed away in his art studio in Webster Groves on Friday, December 9, 2011. He was 78 years old. Born in St. Louis County to the late Ralph Marshall Broughton and Doris Isermann Broughton, he attended Washington University School of Fine Arts, was a 101st Airborne Ranger during the Korean War, as well as, an Army Intelligence officer at the 8091st Intelligence School in Tokyo, Japan. While in Tokyo, he studied at Waseda University and had several of his artworks added to the permanent collection of the Museum of Art in Tokyo. Upon returning to St. Louis, he designed buildings side by side with international architects from around the world for the Bank Building Corporation of America while exhibiting his artwork in the St. Louis area. One of his earliest solo sold out exhibitions was held at the art gallery located at the Wohl Center at the Jewish Community Center on the I. E. Millstone Campus in Creve Coeur. After 5 years at Bank Building, he started his own 7 member architectural firm designing buildings across the United States while combining his art with his architectural projects. Locally he designed for the owners of Watlow Electric for over 50 years, for the original owners of La Chateau in Frontenac, the Cheshire Inn and Tan Tara Resort in Lake of the Ozarks, just to name a few. Along with building design, he designed for the owners of Ozark Airlines during the early stages of development of the St. Louis based airline. When he met his wife, Linda, they formed a 32 year partnership creating art and architecture throughout the United States, as well as, a large project in Germany. In 2006 they opened an art studio in Webster Groves to create his 3 dimensional art and paintings. In 2009 he received a Pollock-Krasner Foundation Grant created by Lee Krasner in honor of her late artist husband, Jackson Pollock. In 2010 he was recognized as one of the outstanding artists in the United States by United States Artists Organization, founded by the Ford, Rockefeller, Prudential and Rasmussen Foundations. Artists.de in Dusseldorf, Germany selected 2 of his works for their Editor’s Choice from a group of 160,000 artworks from artists throughout the globe. Only 596 works were chosen for Editor’s Choice. His works are also in permanent collections on view to the public at the Staenberg Family Complex and the Marilyn Fox Complex at the Jewish Community Centers in Creve Coeur and Chesterfield. Mr. Broughton is survived by his wife, Linda Case Broughton, his son Marshall Broughton, Nancy Broughton, Susan Broughton, Jennifer Engel, and grandchildren Jonathan, Sarah and Connor Broughton. According to his wishes there were no services. His ashes will be scattered in multiple locations that had great meaning in his life. Memorials are preferred to The Backstoppers or a charity of choice. For online go to email: [email protected] or ralf-broughton-art.artistwebsites.com

The family of Ralph Morris Broughton created this Life Tributes page to make it easy to share your memories.

Send flowers to the Broughton family.