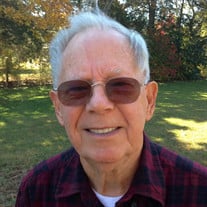 Charles Kenneth Hall Hall, Charles K., of Villa Ridge, Missouri, was born June 17, 1927 in St. Louis, Missouri, to Elmer and Hazel (nee Charbulack) Hall and entered into rest, Wednesday, November 16, 2016 at his residence at the age of 89 years, 4 months and 29 days. He was married to his wife, Carolyn, on June 25, 1949 and they were loving partners for over 67 years. He is preceded in death his parents, his brother Arthur Hall, his sister Doris Krueger and grandson-in-law Jeff Rozmeski. He is survived by: his wife Carolyn Fay (nee Harbit) Hall, four (4) children, Barbara (Jacque) Gray, Joyce (Tom) Beard, Gregory (Susan) Hall and Pamela (John) Whitelock, seven (7) grandchildren, Michael Gray, Charles (Jennifer) Gray, Brian (Lynn) Easley, Christina (Jeff) Farrier, Carrie Rozmeski, Lauren Megan Whitelock and John Whitelock, six (6) great-grandchildren, one (1) brother, Vernon (Mary) Hall, two (2) dogs, Jewel and Pearl, and many other relatives and friends. Charles loved gardening, bird watching (especially purple martins), and being a handyman at church and family/friends’ homes. He enjoyed playing and coaching baseball, and watching the St. Louis Cardinals. Understanding the fundamentals and strategy behind playing baseball was important for him to share with others. He led by example and his children and grandchildren learned by his example. They noticed that his wife, Carolyn, never opened a door and he always carried their wedding photo in his wallet. Although he retired from Union Electric (Ameren) with 45 years of service as a construction auditor, he would tell others that his job was to make his wife, Carolyn, happy. He is fondly remembered and will be dearly missed by all who knew and loved him. Memorial services will be held on Tuesday, November 22, 2016 at 2:30 pm at New Beginnings Lutheran Church (791 New Beginnings Dr, Pacific, MO 63069 – NBLC.net). He will be laid to rest at Jefferson Barracks National Cemetery, as he proudly served in the Coast Guard during World War II. Family and friends can review and share stories, photos and condolences online at Cremation Society of Saint Louis and follow details of this event and others in the community at www.facebook.com/stlchapelhill. In lieu of flowers, the family is requesting donations to be made to the following charitable organizations in memory of Charles: Purple Martin Conservation Association (PMCA), 301 Peninsula Drive #6, Erie Pa 16505, Attn: Janice Vacco Parkinson's Disease Foundation, 1359 Broadway, Suite 1509, New York, NY 10018 Or a charity of your choice Arrangements were made with Cremation Society of Saint Louis.

The family of Charles K. Hall created this Life Tributes page to make it easy to share your memories.

Send flowers to the Hall family.