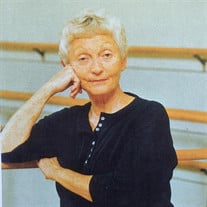 On Saturday, February 27, Nathalie Jean Le Vine, loving mother and well-known St. Louis ballet teacher passed away at the age of 91. Nathalie was born in Las Animas, Colorado to Jean (Juanita) and Fleming Christian and moved to Los Angeles at the age of eight. Her love of ballet quickly grew into a professional soloist career after starting dance lessons to overcome the disabilities associated with childhood Polio. Her performing career began at Radio City Music Hall, and included film and television productions as well as, musical theater in Los Angeles. Her professional training included many greats from the dance world; Slavenska, Celli, Panaieff, Nijinska, Pereyslavec, and the Royal Ballet School in England. A knee injury pivoted her dance career to teaching and she devoted the remainder of her life to teaching Russian and Italian Classical Ballet technique to children, teenagers, and adults. After graduating from UCLA, Cum Laude, she moved to St. Louis with her husband Professor Victor T. Le Vine where she founded Metropolitan Ballet of St. Louis and was its Artistic Director for thirteen seasons. She also founded and directed Ballet Conservatory in St. Louis. After retiring in 1999 she continued to guest teach and coach talented dancers, many of whom have gone on to professional careers themselves. Nathalie is preceded in death by her mother, father, and husband. She is survived by her two children Theodore Le Vine and Nicole Vizcarra, Sister Lillian Stevens, Cousin Russ Dale, and several nieces, nephews, grandchildren, and great-grandchildren. Due to COVID, a funeral service is not planned. However, a memorial tribute to her life will be scheduled for a later date.

The family of Nathalie Jean Le Vine created this Life Tributes page to make it easy to share your memories.