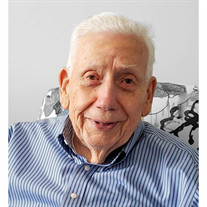 Richard “Dick” Callier died peacefully on February 14, 2021 in Wildwood, MO at the age of 89, three days before his 90th birthday. Richard is survived by his five daughters, Christine (Greg) Jones, Karen Schaefer, Colleen “Debbie” Hardman, Darliene Callier, and Marianne “Charlie” (Mark) Emery. He will be remembered by his nine grandchildren Richard (Jennifer) Schaefer, Bryan (Amy) Jones, Nathan (Amy) Barnhart, Jennifer (Jeffrey) Fillers, Kelly (Kirk) Latta, Jonathan (Ellen) Jones, Colin (Leslee) Hardman, Phillip Emery, and Taylor Emery and his 14 great-grandchildren, Grace, Avery, Elle, Peyton, Khloe, Maya, Jet, Charlotte, Kaiden, Leo, Amelia, Scottlyn, Maxwell and Berklee. He was preceded in death by his wife, Marianne (nee Cortopassi) (November, 2018), his parents Felix and Willie Callier; siblings Joseph Callier, Kay Henson, Scott Callier, and Jean Johnson; and son-in-law Dennis Schaefer. Richard was born on February 17, 1931 in St. Louis, MO. In 1949 he graduated from McBride High School and married Marianne, the love of his life. After moving several times while working for Grolier Encyclopedia, he settled down in St. Louis and began working for the A. B. Dick, Company. He began his career as a salesman, eventually working his way up to President of the company before retiring from Datamax after 35 years. Dick and Marianne enjoyed watching their 5 daughters grow up and begin their own families. Friday evening happy hours or a Sunday afternoon barbecue were regular events. His children remember him as a confident, loving father who encouraged them to pursue their goals. Richard was passionate about travel and has visited most of the world. He loved gardening and working out in the yard with Marianne. They enjoyed watching the changing seasons from the porch swing or through the sunroom windows. He was well liked and respected by his family, friends and coworkers. He was an excellent listener and motivated many people. Richard’s positive attitude never went unnoticed, which was exemplified by his favorite saying, “I'm alive, alert, awake, joyous and enthusiastic about life”. A celebration of Richard’s life is scheduled for Sunday, May 2, 2021 from 12-4 PM at Brookdale Farms, in Eureka, Mo. All are welcome to attend and celebrate Richard’s life. The family would like to thank the caregivers at Anthology of Wildwood for their efforts, care, and dedication.

The family of Richard Callier created this Life Tributes page to make it easy to share your memories.

Send flowers to the Callier family.